9 Ways We Sit – Thanks to Technology 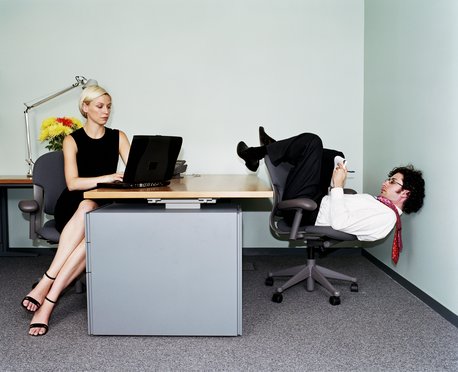 The workplace most of us are accustomed to has been optimized for the desktop computer: Start with a table, plop a machine on top of it, add a chair, add a human. This has not been the most creative of systems, maybe, but it’s made sense: The computers in question have been expensive and bulky and, by design, stationary. Everything else, human included, has been relatively flexible.

But that set-it-and-forget-it model of office ergonomics could be changing. As smartphones and tablets — computers whose whole point is their mobility — become more ubiquitous in our lives,they’re becoming more common at the office. And they’re changing not just the way we communicate with other people, but the way our bodies communicate with their surroundings.

Office furniture manufacturer Steelcase realized that its product designs would likely need to adapt to this new mobile-enabled workspace. So the company conducted a study of office workers — 2,000 of them, across 11 countries — to see how they relate to the many machines they now use to get their work done.

Through in-person observations, interviews and snapshots of people at work, Steelcase concluded that the way we compute is, indeed, changing the way we sit. “What we noticed,” says James Ludwig, Steelcase’s vice president of global design and engineering, “was these new technologies, this new breed of devices — and the new sociology we were seeing at work — had driven nine new postures that we had never seen before.”

The oft-discussed “lean back” experience of tablet reading, done in a chair. (This posture requires good back support from a chair, especially for the head and neck.)

You’re using your laptop. And your phone. At the same time. (This requires good arm rests, provided by either tabletop or chair.)

You’re sitting at your desk, but you’re using your handheld device to read, email, or, yes, text.(Arm rests not required, but ideal.)

This is a scrunched-body posture usually reserved for reading (though it can be used for typing, as well). The sitters lean back, pull up their legs, bend their knees, and draw their devices close to their bodies. This is, Steelcase notes, a posture used more often by women than by men.

The sitter leans over his or her desk, directly over the screen of a touchscreen device. This posture is pretty much exclusive to tablet/smartphone use.

A compromise between the lean-back posture of “The Draw” and a more standard sitting style, this posture allows the sitter to check his or her smartphone in a relaxed posture, while also retaining a bit of privacy when it comes to what’s being shown on the screen. It’s especially popular during meetings.

You’re absorbed in your work, leaning into your table and toward your computer, with arms placed either on a chair’s armrests or on your desk. This posture often involves slouching.

This might also be called the “all the way back”: It involves a nearly full recline in one’s chair — a posture enabled in part by the popularity of large, high-resolution monitors that allow people to read screens from a distance (and also ideal for smartphone-based reading, email-checking, etc.).

This is “stretching out” and “hunching” at the same time: When people get tired, they tend to push their computers away from them, compensating for the new screen angle by slouching down toward their desks. They then prop themselves up with their arms on their desk surfaces, sometimes propping their chins up with a free hand.

The catch with each of these postures, Steelcase says, is that our current chairs, generally speaking, aren’t terribly well-suited to our new ways of sitting. And “because these new postures are not adequately supported, workers are uncomfortable, in pain, and doing long-term harm to their bodies,” the company notes. (Chairs: killing us, softly!) So “while technology boosts productivity, it can cause pain that disrupts our work, our ability to concentrate, and our creativity.”

Steelcase’s particular solution is a new chair, the Gesture, that takes its design cues from the nine postures the company observed in office settings.

The point of this uber-ergonomic furniture is flexibility: Its arms (the “limb interface”) pivot, stretch, and offer support for typing and reading on a mobile device; its wide seat accommodates varying body configurations (and body types); its back “cradles the user no matter the posture.” If we’re using multiple computers, the thinking goes, we need chairs that appreciate the variety — human-holders that support the humans in question, whether they’re sitting, stretching, or, yes, strunching.