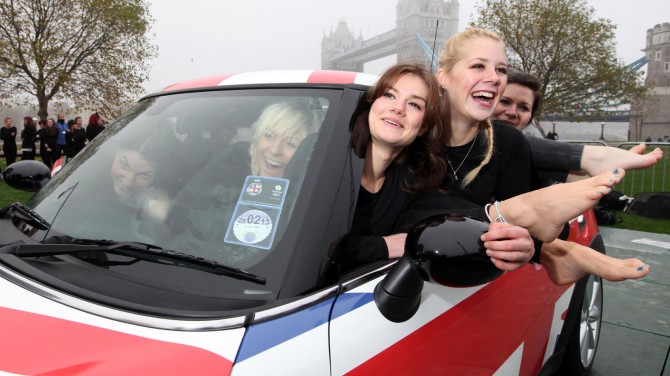 Everyone has a hobby — some are just a little more eclectic than others.

These photos shown below are not Photoshopped, though you might think so at first glance. They are actually some of the Guinness World Record holders that will be star in the new CBBC kids’ show, Officially Amazing.

The show features host Ben Shires in search of the world’s craziest record-breaking feats. It premieres on Monday, and if you don’t get BBC, here’s a sneak peek at what you’re missing.

1. Longest Wave Surfed by a Dog

2. Longest Fingernails on a Pair of Hands

Chanel Tapper in California has a tongue that measures 3.8 inches from the tip to the middle of her lip.

5. Most Dogs Skipping on the Same rope

Sharran Alexander is a sumo wrestler in London who weighs 448 lbs.

The GEN H-4, made by Gen Corporation in Japan, weighs only 154.32 lbs and has a rotor length of 13 feet. The vehicle has one seat, landing gear and power unit. It also has two sets of coaxial contra-rotating rotors, which eliminates the need for a balancing tail rotor.

9. Most People Crammed into a Mini Cooper

Dani Maynard and the David Lloyd Divas managed to fit 28 people into a Mini Cooper in the UK.